History of Saint Mary of the Assumption Church of Stockton California

History of Saint Mary of the Assumption Church of Stockton
California 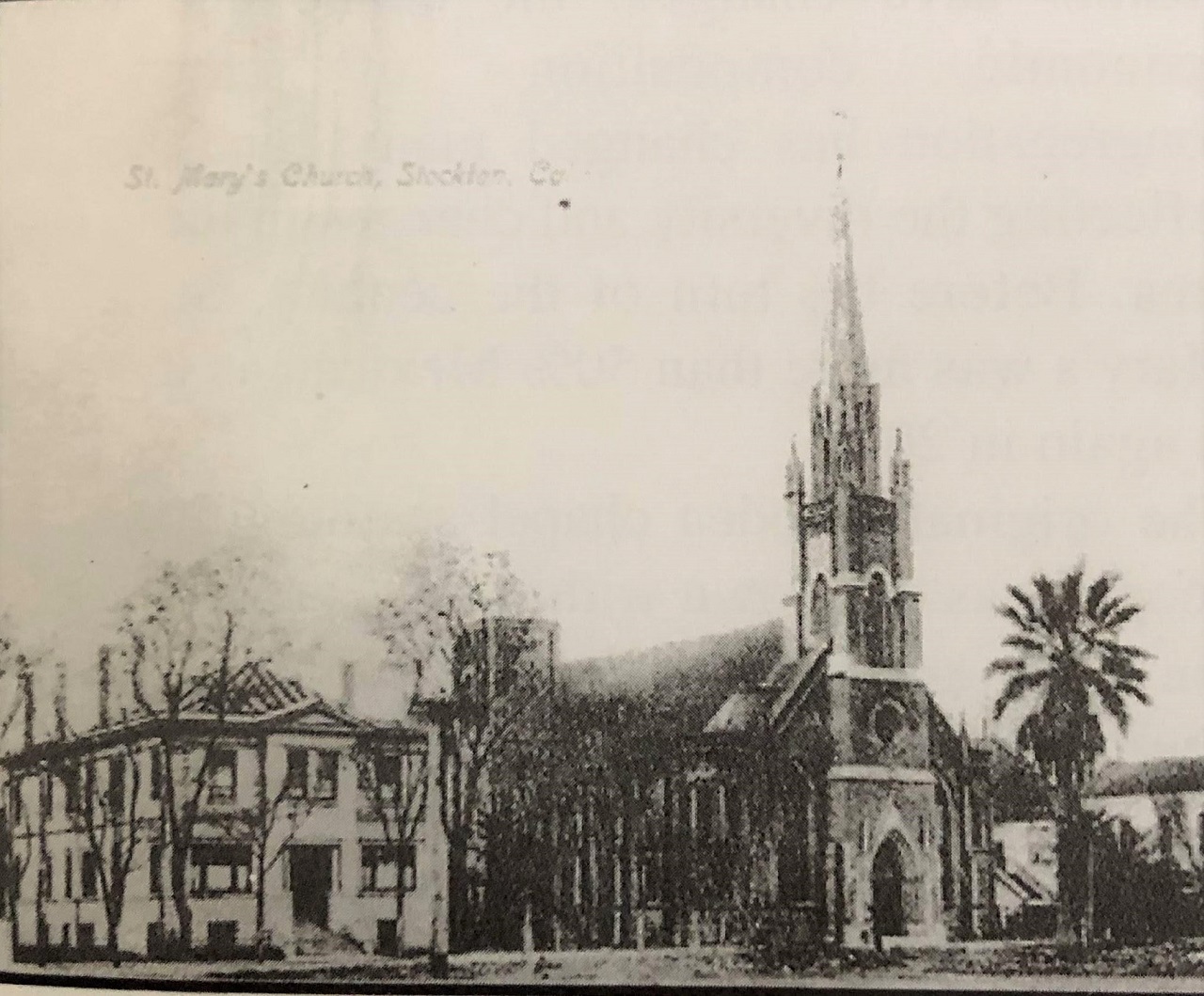 At the time St. Mary’s Parish was formed, California was in transition and the mission system manned by the Franciscan and along the coast was in decline. Two events gave rise to these changes. In 1848, Mexico ceded California, as well as Texas and New Mexico, to the the United States. That same year, gold was discovered, and thousands of people flooded into California seeking their fortune in the Mother Lode. Stockton suddenly became important because of its location on the banks of the San Joaquin River.

Priests often traveled with immigrants coming to this area. One such man was Father Villarrasa. Most believe he was the first to hold Catholic services in Stockton. Another priest, Father Dominic Blaive, came to Stockton with a French party in 1851. Captain Charles Weber, the founder of the city, convinced Father Blaive to remain, and he became the first pastor of Saint Mary’s Parish. Captain Weber donated the property on Washington Street where at first a Wooden Church was constructed. It was a genuine product of the early days as white cloth took the place of plaster and the altar was made of rough boards.

When Father Blaive became Pastor, St Mary’s Parish presided over a vast region. There were no official boundaries and the expanse even covered areas beyond what is today San Joaquin and Stanislaus Counties. Because of this large territory, the pastors of St. Mary’s found it necessary to establish mission churches to serve Catholic families many miles away. As the number of Catholics in these missions grew and they could stand on their own, they became Parishes. The process of forming new Parishes began in 1852 with St Louis at La Grange and ended in 1951 with St. George’s in Stockton. This explains why St. Mary’s is considered the Mother Church. Even the church building that became the Annunciation Cathedral of the Diocese of Stockton was conceived and built by a pastor of Saint Mary’s Parish.

Five years after the wooden church was constructed, it became evident that a larger building was needed. By 1860, about 3,700 lived in Stockton. The third pastor of Saint Mary’s Parish, Father Robert Maurice, initiated an annual Festival to raise money to build a new church. Father Joseph Gallagher was pastor of the church on July 7, 1861, when the cornerstone of the present day brick building was set. Archbishop Alemany dedicated the church of Saint Mary of the Immaculate Conception. Though this was the official name, most Catholics were more inclined to Assumption.

Though the First Mass was said in the new church on Christmas Eve of 1861, the church building was not fully completed until 1913. It was built in sections, each section being constructed as funds were acquired. Due to the fact that it was so long under construction many architects and contractors had a hand in its building. Although the present church has not been entirely constructed according to the original plan, it is a fine representation of the Gothic design in church structures. The exterior of thechurch has undergone some repairs since 1913, but remains essentially as it was then. The interior of the Church iis another story. There were major renovations and changes made in the 1940s, 1960s. Four of the frames of the original Stations of the Cross were used to form the present tabernacle.

By 1870, almost five thousand people lived in Stockton. One report noted that the inhabitants came from many ethnic groups. With this booming population, Father William B O’Connor, became the fifth pastor of Saint Mary’s in 1872, and would serve until 1911. In the course of his work for the Parish, Father O’Connor accomplished much. He founded St. Joseph’s Hospital. A life size statue of him erected in 1914 still stands in the gardens of the hospital on California Street. Father O’Connor also built schools and was instrumental in having members of religious orders brought to Stockton.

Father O’Connor served his flock well and was especially loved for his courageous work in 1881, when a terrible smallpox plague swept over Stockton killing hundreds.  Father O’Connor went to each house-Catholic, protestant, and Jew alike to bring consolation. There were many tears when he died in 1911. One protestant writer said of him: to the church he served we do not belong. But to the holy and beautiful and serene and useful life of this good man, we want to pay the homage of sincere and abundant respect.

A bell weighing fifteen hundred pounds, cast in 1853, and carried around the horn once hung in Saint Mary's Church. The bell is now in the tower of the Cathedral of the Annunciation. The bell was moved by Father William E McGough who succeeded William O’Connor as pastor. The new pastor was no ordinary man. Like O’Connor, he was full of energy and Saint Mary’s Parish prospered under his direction. In 1936, Pope Pius XII elevated him to Monsignor.

Monsignor McGough noticed that north Stockton was becoming more important. He decided that a new church was needed. He conceived that his “New Saint Mary’s” would replace the Old Saint Mary’s on Washington Street. He planned to have the old church torn down! With this in mind, the Monsignor had the bell moved to the “New Saint Mary’s. World War II came along and interrupted the Monsignor plans. After the war, the sentiment changed and the “Old Saint Mary’s” was spared. But that created another problem. There were two churches referred to as “Saint Mary’s” in Stockton. To reduce the misunderstanding, the New church on Rose Street became Saint Mary’s of the Annunciations, while the “Old Church was to be known as Saint Mary’s of the Assumption”. It is not entirely clear what happened to the name.

In 1944, while Monsignor McGough stayed on as pastor of the New Saint Mary’s, the Reverend James O’Connor became pastor of Old Saint Mary’s. He is not to be confused with William B. O’Connor talked about earlier, but he, like his predecessor, was energetic. One of his first endeavors was to retrieve the bell. What followed is an amusing piece of church history. The Archbishop decided that the bell should be returned which made Monsignor McGough unhappy.